In the heart of South West Montreal, Centre de toitures B & S Ltée. officially began operation in 1983 when its founder, Murphy Savoie, decided to leave his roofer career to start distributing roofing products.

He observed some difficulty to source himself, hence the idea to combine several products under one roof.

At the time, the former local car wash already served deposit products and it cost $ 1,000 per month for rent.

In no time, space becomes so tight; it was sometimes difficult to move inside. A metal cutter, installed near the main window on Notre Dame St became an attraction.

Quickly the small back yard is overflowing with products and goods and it became necessary to expand to meet the demands of the roofers who were coming increasingly to obtain shingles and other tools needed for their projects.

Then in 1996, after several years of research and development, Les Produits Murphco Ltée a company that produces various models of copper drains became a sister company. It is also experiencing a shining success thanks to the metal transformation into large-scale sheet..

Today, the Centre de toitures B & S Ltée has a start of the art workshop and a fleet of modern trucks. It offer its customers large recognized brands such as Soprema, BP and Firestone. The company offers the transformation of sheet metal.

Now looking into the future, Centre de toitures B & S Ltée remains a leader in terms of new products and customer experience.

A native of Kedgwick in New Brunswick, Mr. Savoie has over 50 years experience in the the roofing industry. A roofer himself, he now heads several successful companies. In 1983 he opened the Centre de toitures B & S Ltée and, in 1996, Les Produits Murphco Ltée., a company that manufactures copper roof drains.

Mr. Savoie has always wished to have his own business. Today, it is with pride that he sees the third generation of his family participating in the operations of its companies thanks to the values ​​it has managed to transfer.

For Mr. Savoie, the customer remains at the heart of the mission he was given. "I sell service," he likes to say.

Responsible for all business activities of the Centre de toitures B & S Ltée., Johnny Savoie has over 25 years experience in the retail sale of roofing products. Involved in several community activities in Southwest of Montreal, Mr. Savoie has represented numerous times various causes such as the Accueil Bonneau and at minor hockey tournaments.

Responsible for daily operations of the Montreal manufacturing plant for copper roof drains. She was successively controller and responsible for promotion. She is now in charge of purchasing, sales and communications for Les Produits Murphco Ltée and the Centre de toitures B & S Ltée.

Jacques Leblanc, Vice President Les Produits Murphco Ltée
Trained as an Electrician, Jacques Leblanc climbed the positions to ultimately occupied the position of Vice President of Les Produits Murphco Ltée. Among the mandates it has been given, there is the modernization of the distribution center in Saint-Jean-sur-Richelieu and the supervision of its dailies activities. 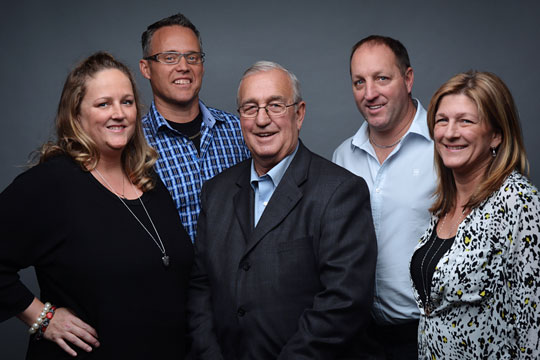